Cycling the C2C … a personal challenge for a fantastic charity! 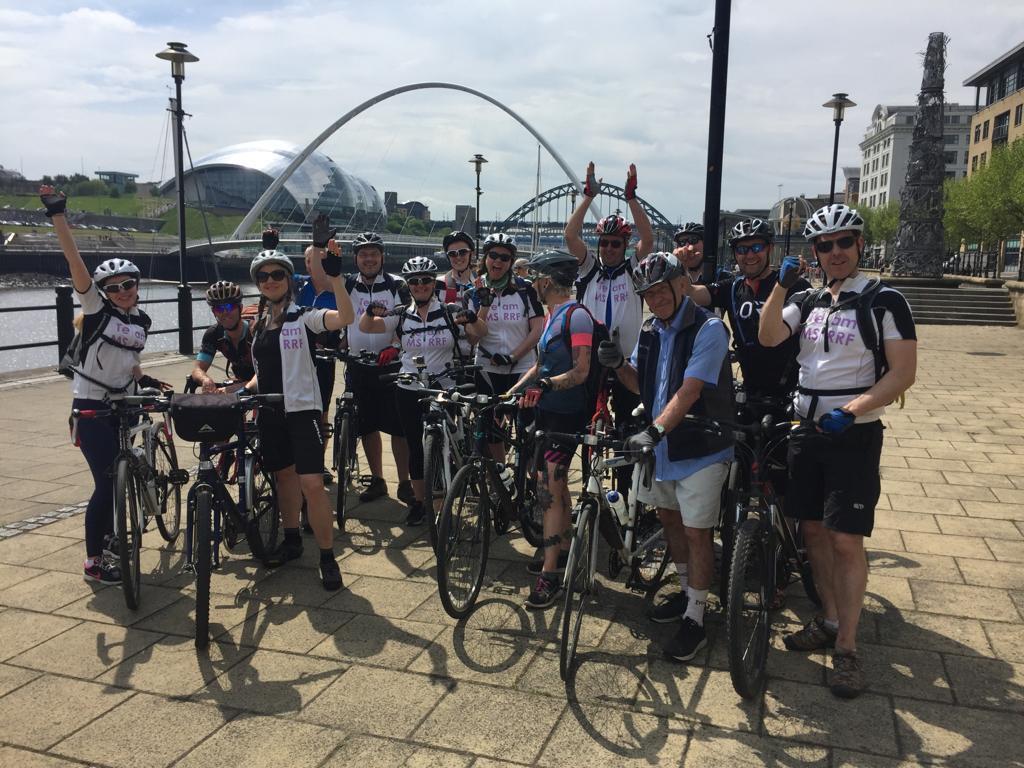 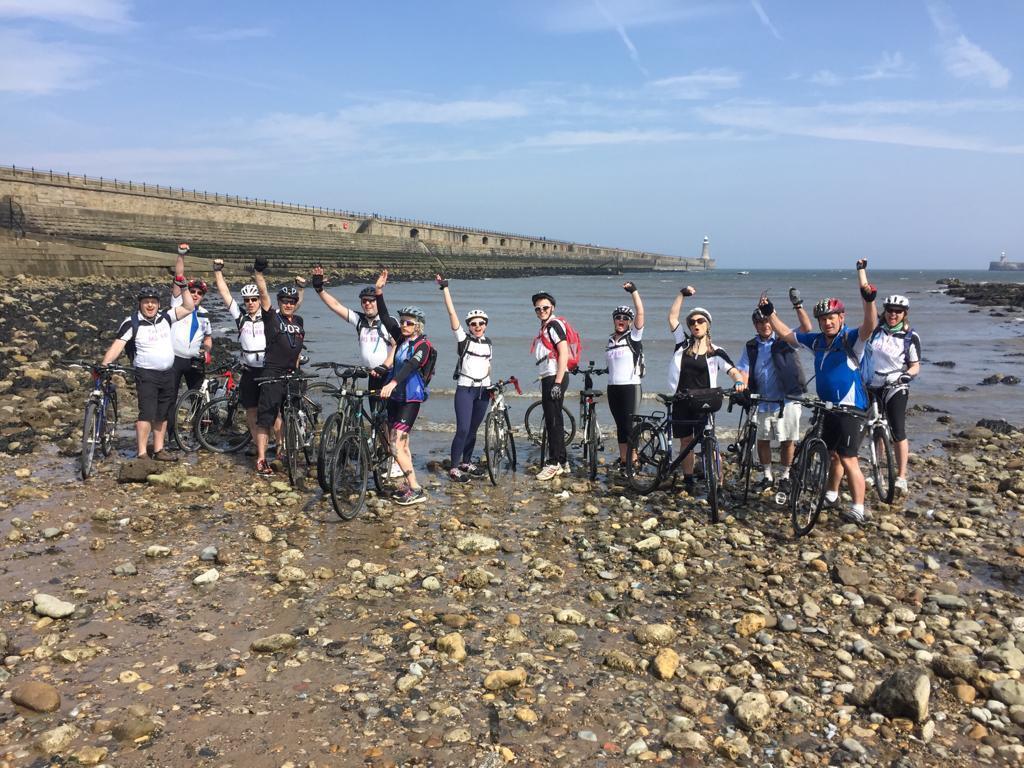 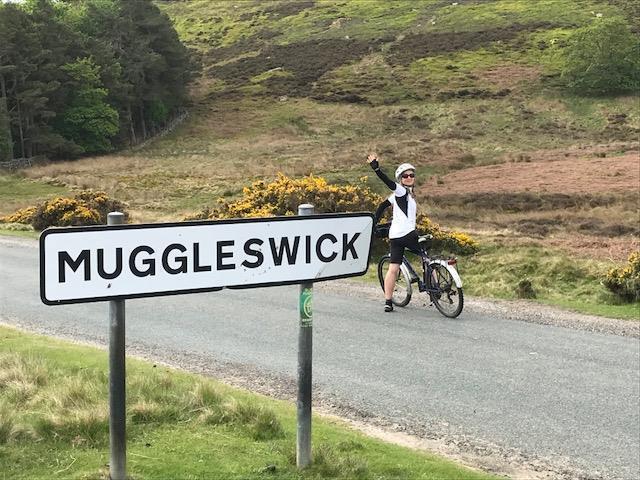 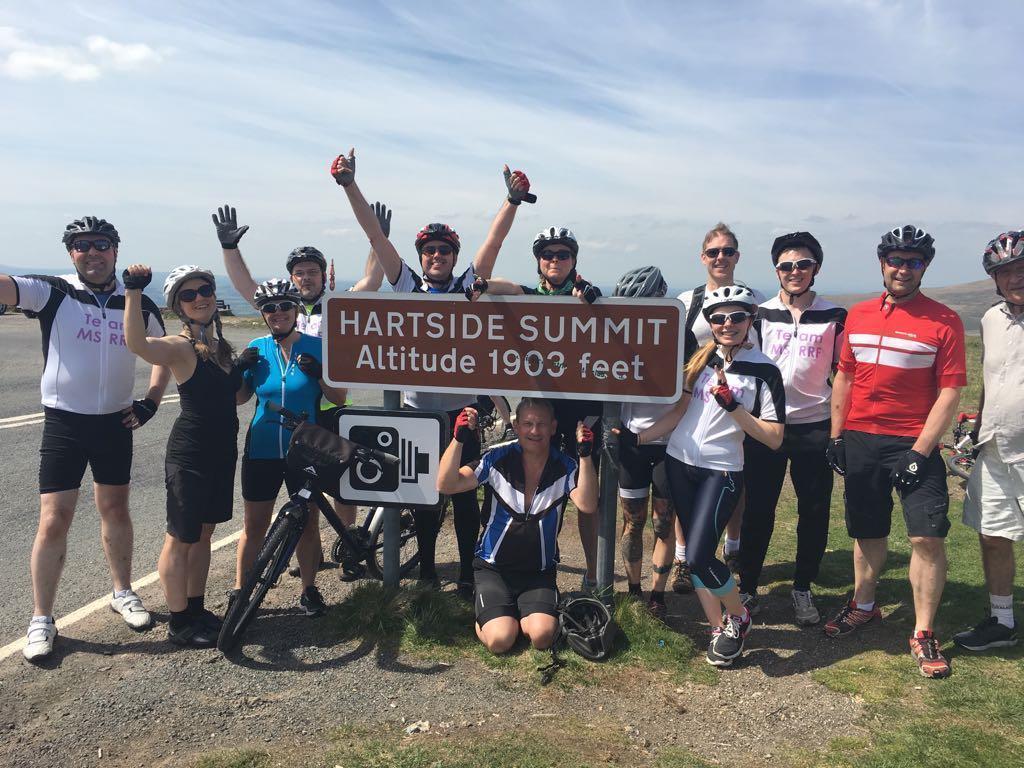 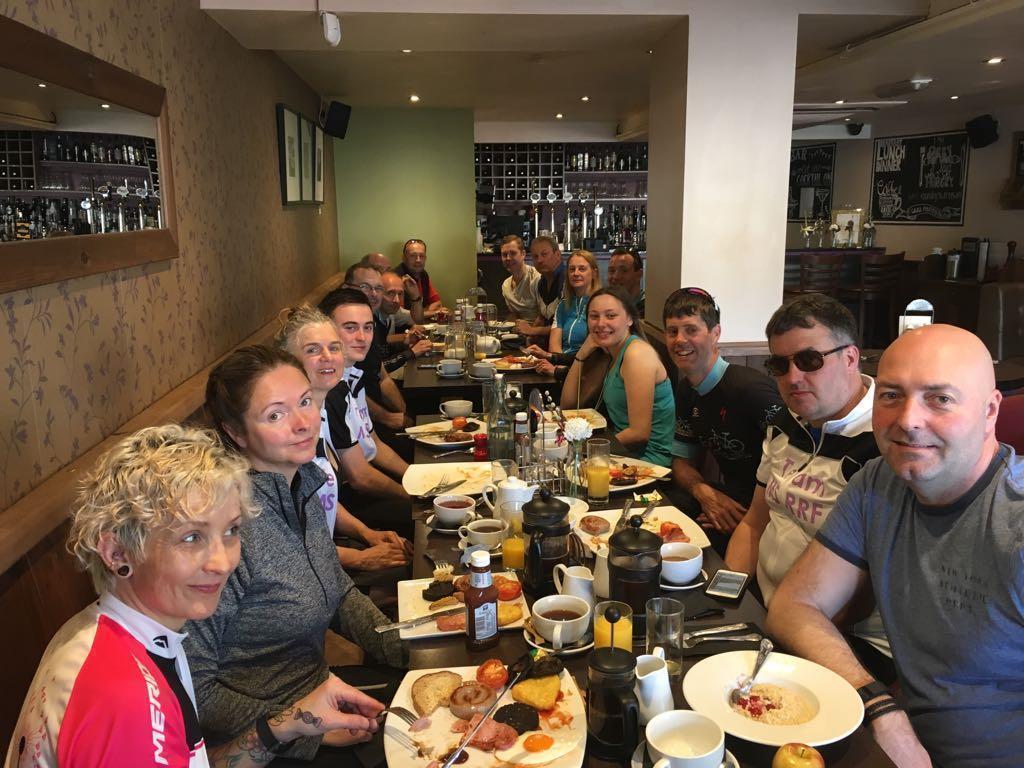 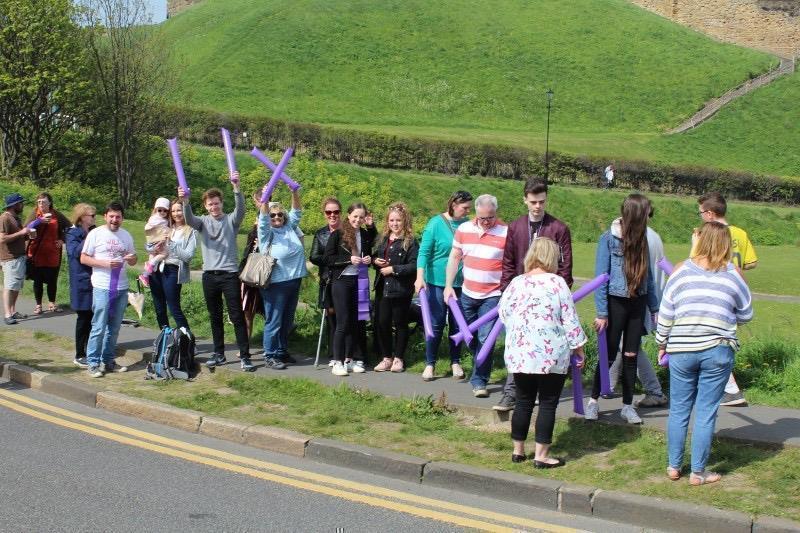 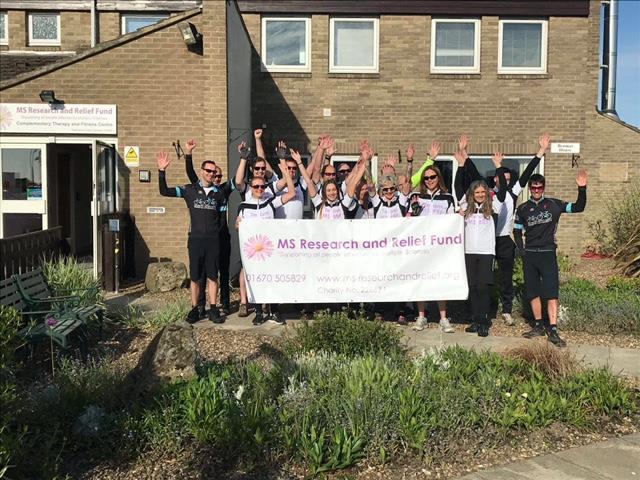 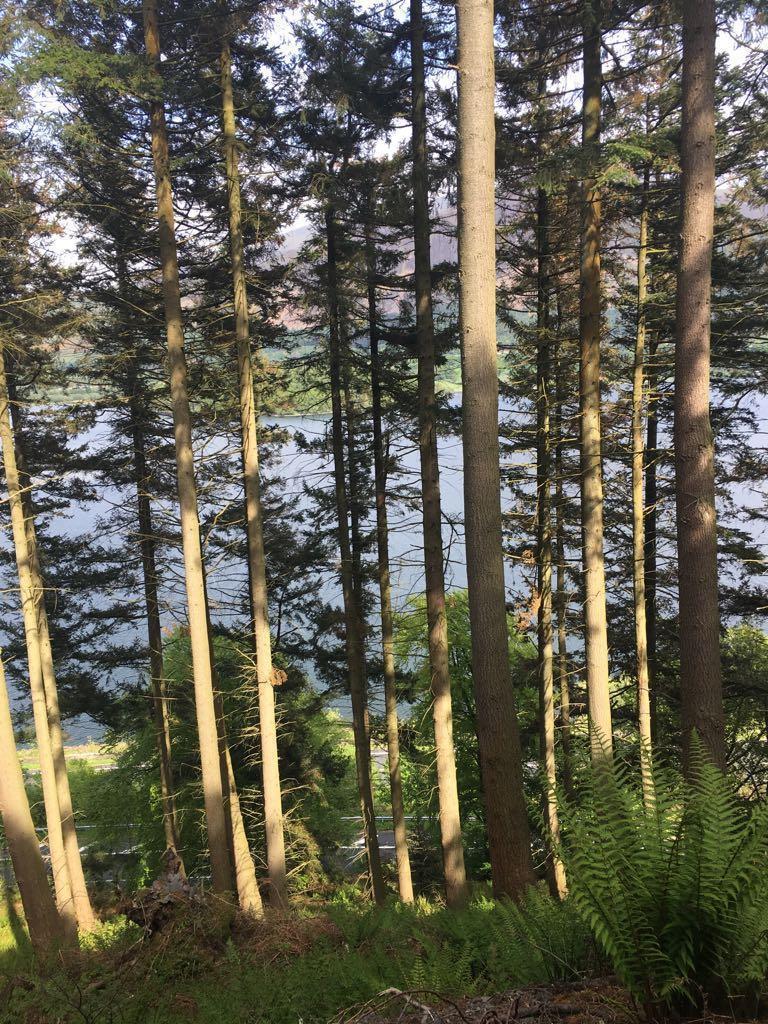 I was introduced to the MS Research and Relief Fund in my local town of Morpeth, due to the fact that Lizzie specialises in accessible travel. Upon finding that they were fundraising for their charity and being a keen cyclist, I signed up for the Coast to Coast (C2C) challenge they were organising, which spans the North East from the Irish Sea at Workington to the North Sea at Tynemouth. A distance of about 140 miles over 3 days, across the high altitude across the Pennines!

This is a challenge I have wanted to try for a few years now. It was a supported trip organised by Cycling Generation, a fabulous company based in Morpeth, who took the cyclists, 15 of us, over in a mini bus with the bikes going on ahead in the support vehicle aka ‘The Van’.

This vehicle would be in close proximity during the ride, to keep the group supplied with water and snacks, also supplying lunches, as well as giving some riders a rest. Cycling Generation also organised the overnight stays in Penrith and Edmundbyers.

I met the rest of the group on a glorious sunny Friday morning and loaded up my bike with overnight bag at 730am, for the transfer to Workington. I was then met by Dan, Hayley and Tania from the charity, with Hayley and Tania doing the challenge too. Arriving at Workington we set off after dipping our rear wheels in the Irish Sea!

I had prepared for this ride by doing about 90 miles a week in the lead up to this challenge, but not unsure about how I’ll perform doing approx. 45miles a day for three days in a row. We were given a pep talk by our guide leader from Cycling Generation, Richard Rothwell, who is a competitive cyclist, so we knew that we are in safe hands.

We set off at a gentle pace, knowing that we had to stick together as a group and not to leave people behind. It wasn’t long before the group started to chat and cycle along, having a laugh and finding all about each other. The distance that we were facing, did not faze me in any way and I was really looking forward to the challenge and getting to know the group better!

After a few miles we hit upon some steep climbs and this is when the group really came into its own, giving a lot of moral support for each other as we dug in up the hills heading towards the van for lunch and a top up of water, Haribos and other energy boosting snacks!

Arriving into Penrith, I was glad to get into my room at The George Hotel for a quick shower then food, before heading to bed with very achy legs, a warm fuzzy feeling that this is day one over and sleeping like a baby.

Up at 7am for breakfast then after packing our overnight bags away in the van, we are off again for what will be the toughest day, heading over the Pennines with some big climbs, including Hartside Pass heading for Edmundbyers. The group are all up for the day ahead which is great for morale, as we set off again in high spirits, only to be hit with a very steep hill climb out of Penrith.

The views are stunning, on a once more glorious sunny day and we have all slapped on the factor 30 sun protection. I can’t believe how great the weather is considering it tends to be quite wet in the lakes area.

Passing through the village of Langwathby the residents are setting up for a Royal Wedding Day Fair with scarecrow versions of Harry and Meghan in attendance. Once again ‘The Van’ was in close attendance with support, those ever popular Haribos and even marshmallows.

Marcus and Ben from Cycling Generation were the other two fabulous guides during the trip, who were equally proficient and professional. One would drive the van and the other would ride at the back of the group for safety reasons.

Riding through an off-road section at Whinlatter, I suffered my first puncture, but the amazing views through the trees on this sunny day toward Derwentwater, this certainly makes me think positively on this great journey.

This is quite a personal challenge for me after suffering a potential life threatening medical incident in 1999 which has reduced lung function for me. In saying that, I am really enjoying this challenge and I think it’s a lot to do with the fantastic welcoming and supportive group of fellow cyclists, the total professionalism and expertise of Cycling Generation and the fact we are all cycling for the great cause which is, the MSRRF!

We have all had some great donations made to us and the charity individually, we were even given another £20 this morning from another group cycling the C2C for their charity! With a feeling of massive achievement and full of support for each other, we were all really ready for a well-earned rest once we reached Edmundbyers and a good night’s sleep.

Again, a lovely day awaits our final day, which will be mostly a lot easier to cycle as we head down into the Tyne basin and our final run into Tynemouth! Spirits are again high as we mount our trusty steeds for the final day of this amazing challenge. We are once again hit with a steep climb straight away which caused some mechanical issues to surface, which the Cycling Generation team dealt with on the spot.

Cycling along the Derwent Walk Cycle path was pure joy on a flat, well surfaced route, arriving into the throng of civilisation into Gateshead as we passed The Metrocentre. Stopping for a group photograph after crossing the Millennium Bridge in Newcastle we were now on the final run in to Tynemouth!

Arriving into Tynemouth we were met by a welcoming committee of friends and family, blowing whistles and cheering, which was quite emotional. Then the cycling group gathered together at the water’s edge to dip our bike’s front wheels into the North Sea, to signify the final act of our amazing C2C challenge!

I personally raised 100% of my sponsorship target at £500, but I believe the group as a whole have raised around a magnificent £12k, which is what really makes this challenge all the more worthwhile.

I thoroughly recommend the C2C challenge, especially with the support of Cycling Generation, who definitely enhance the whole fantastic experience. I have returned back to my ‘normal’ life now, with some new friends from the challenge and an amazing sense of personal achievement.