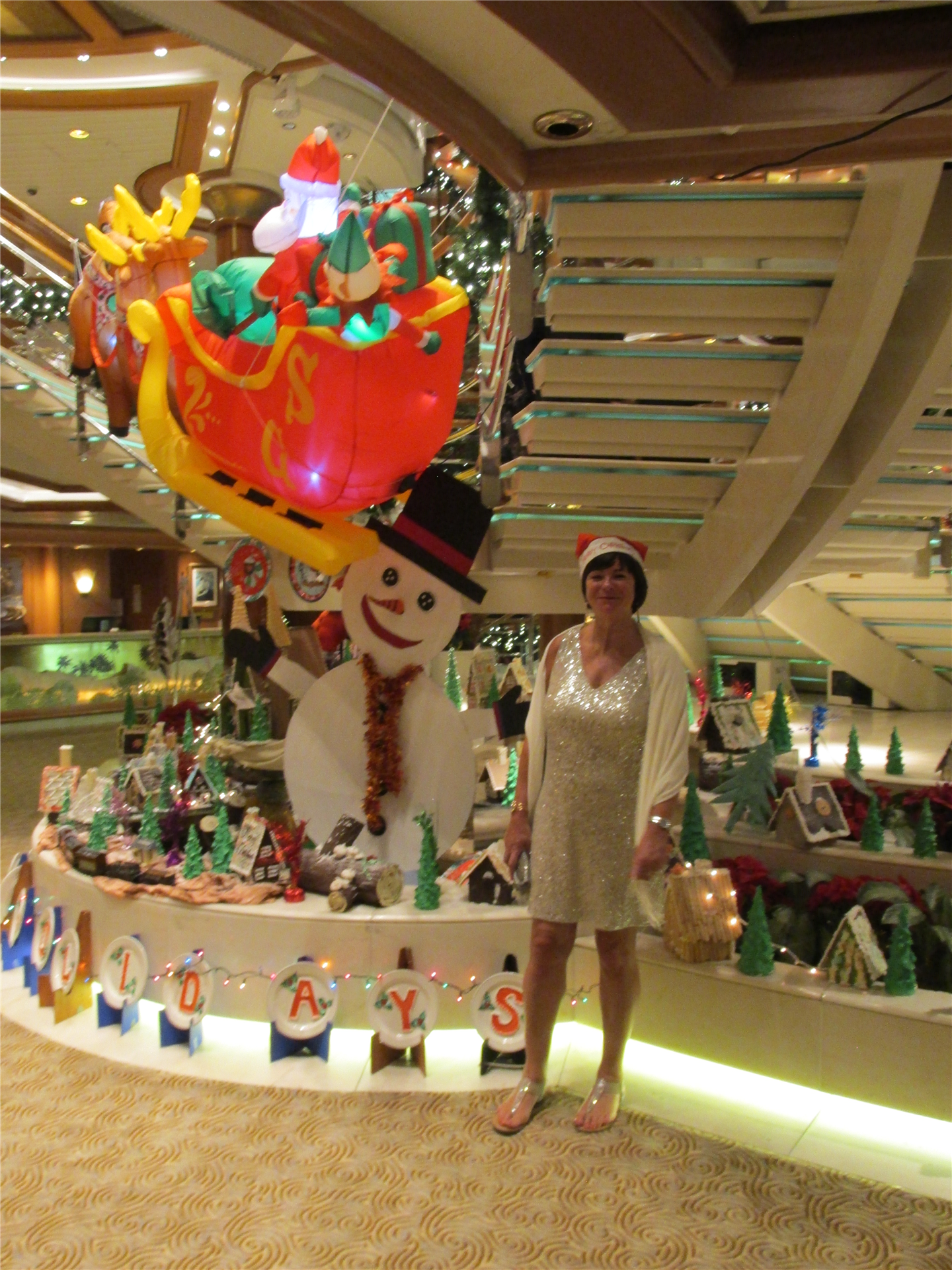 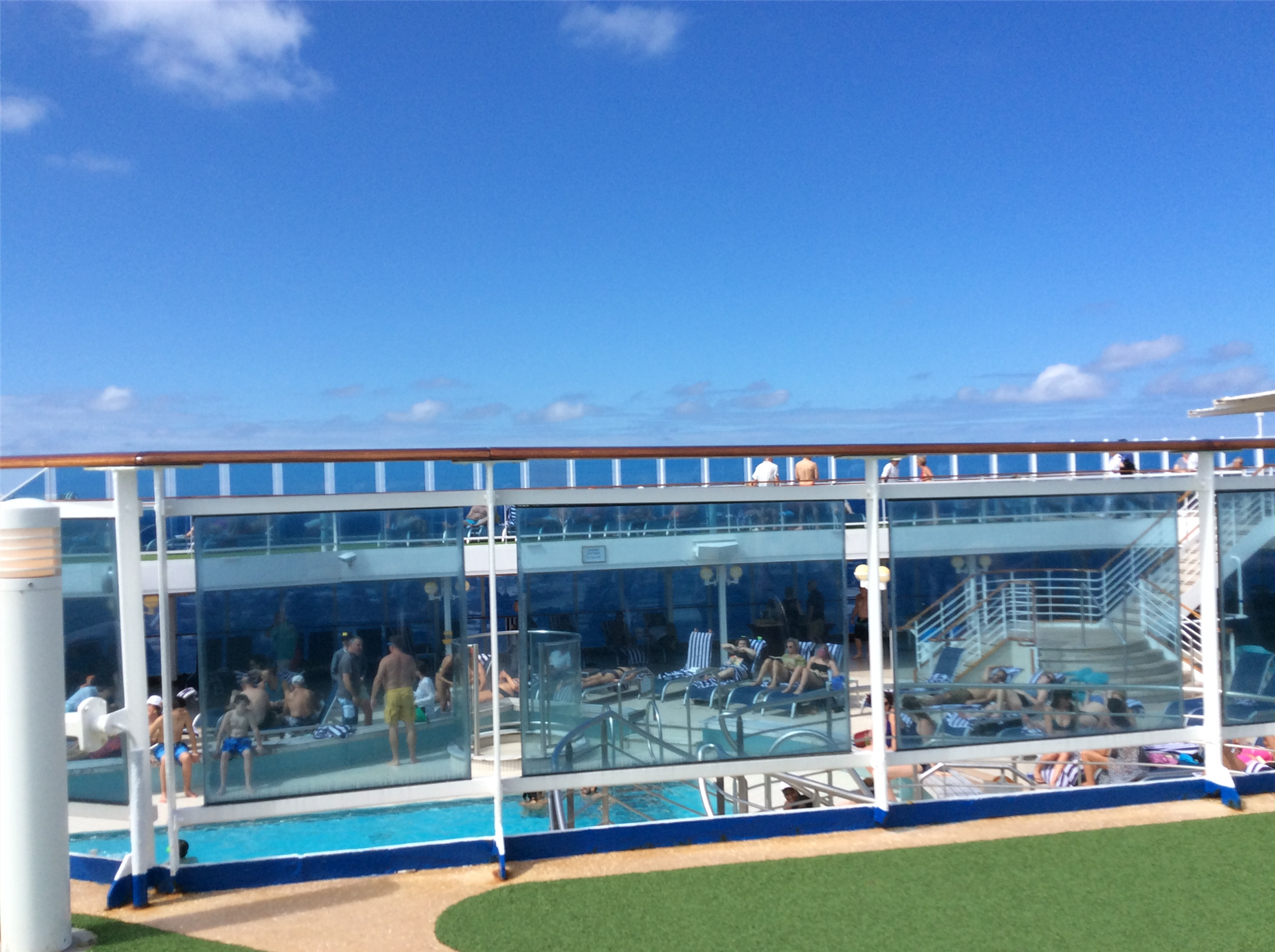 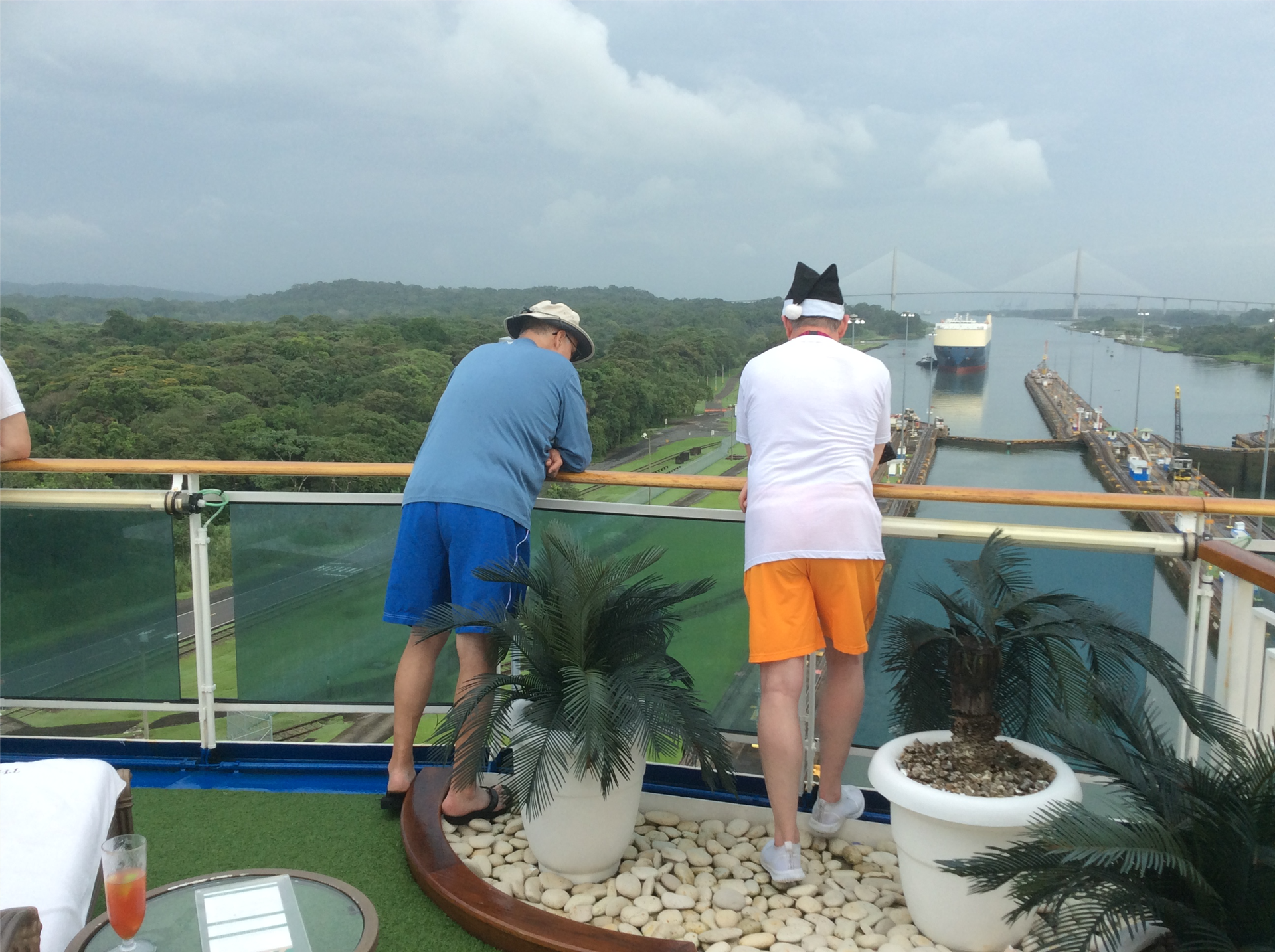 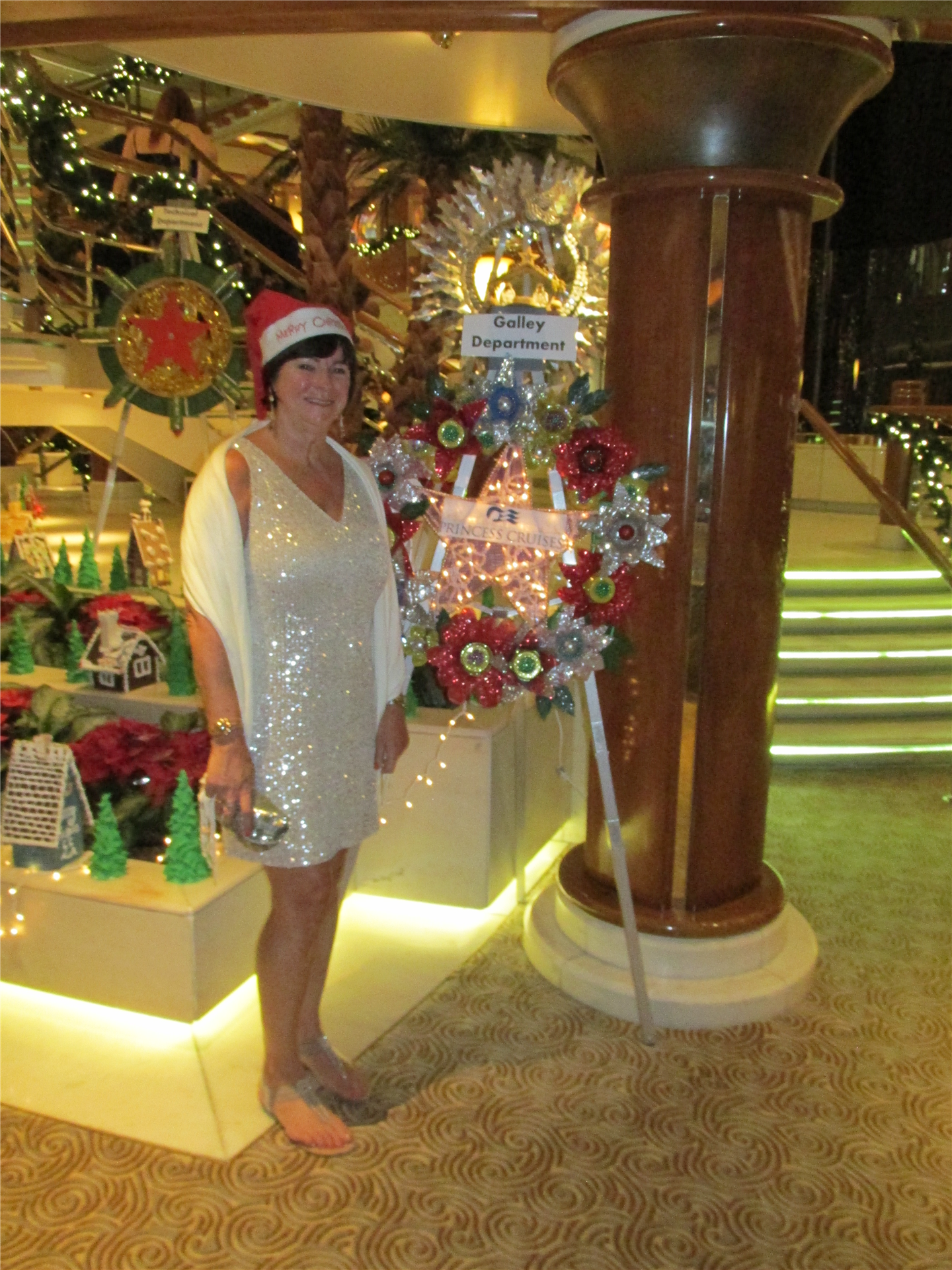 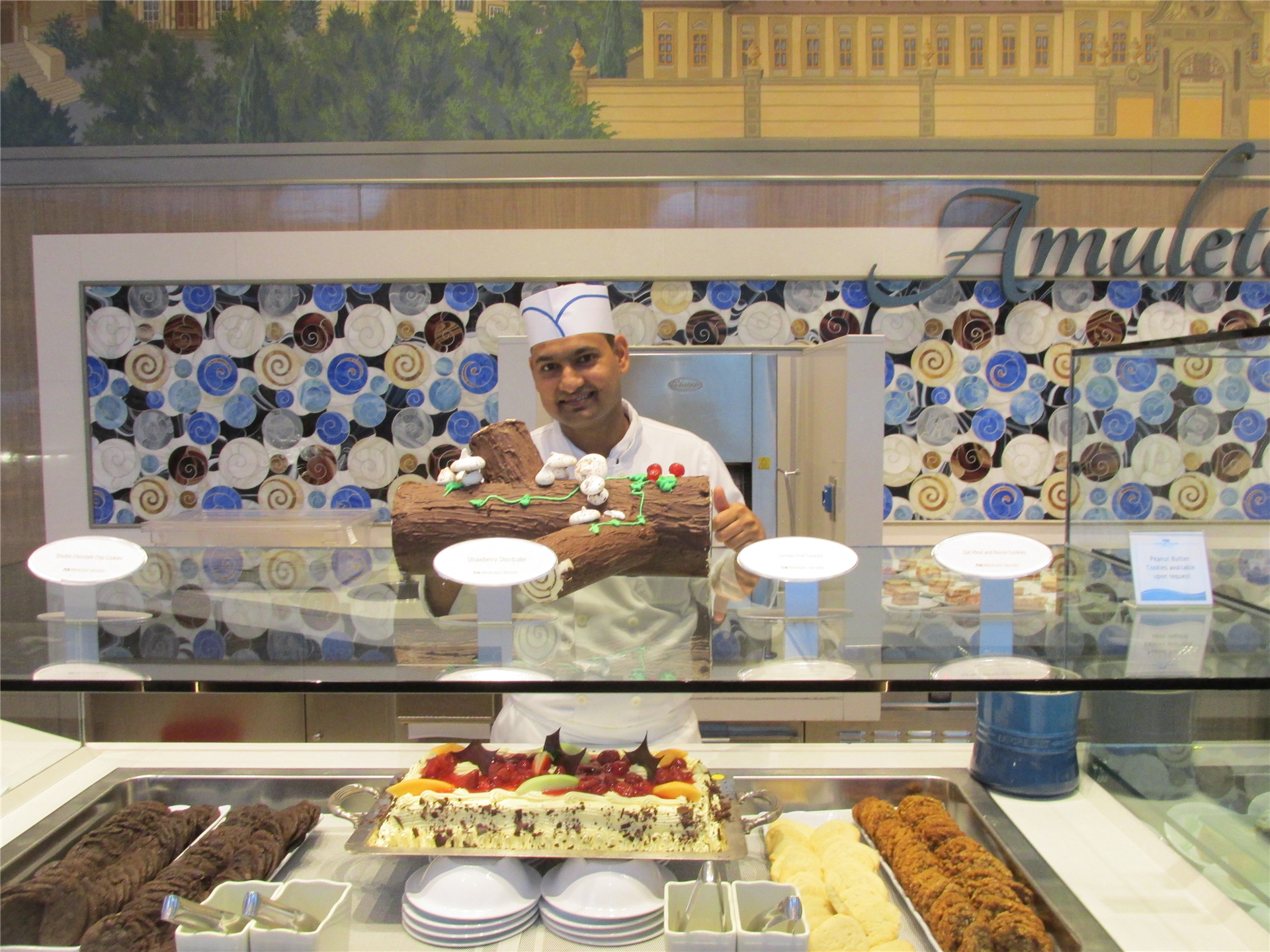 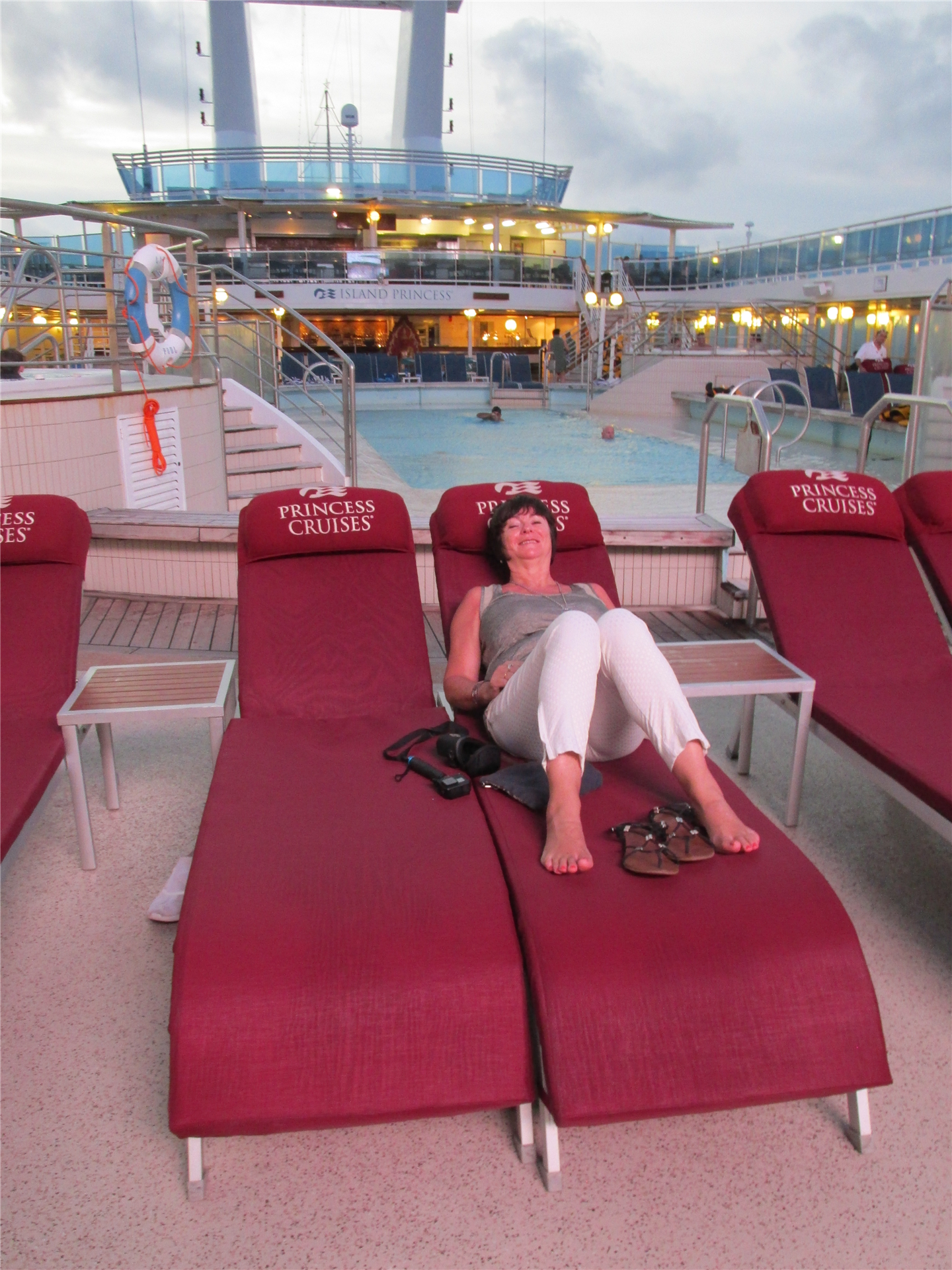 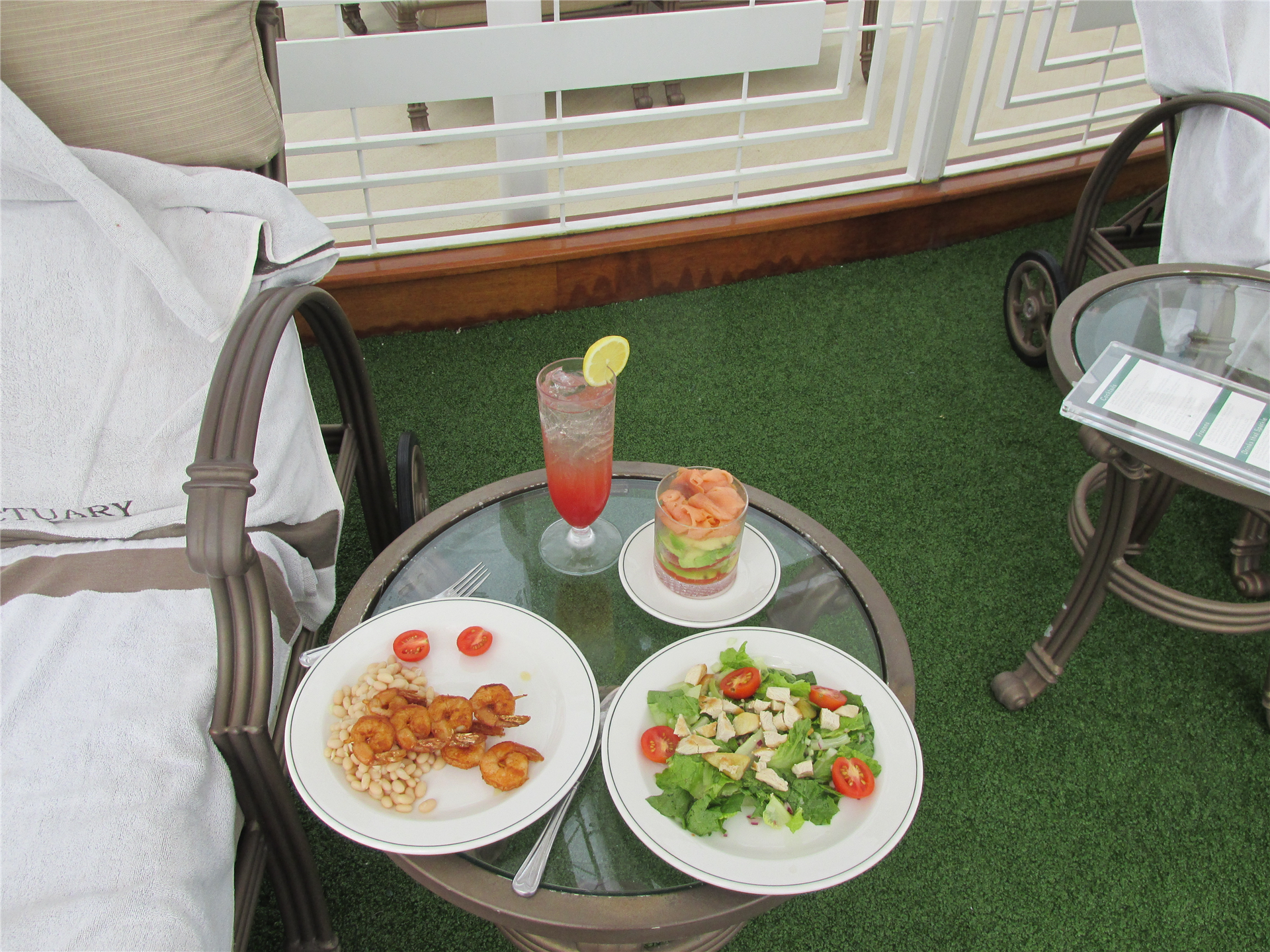 We flew out from Heathrow to Miami to connect with our cruise to the Caribbean and Panama Canal. We flew direct with Virgin Atlantic and booked the economy delight seats which gave us more leg room.

At first I thought there maybe was a staff Xmas party at Miami Airport as only 2 of the 24 desks at immigration were manned. We had to queue to get finger printed by machine then join another queue which didn't move for over an hour to do exactly the same. Ho Ho Ho! Not to be dispirited, when we got to our luggage it had all been put into neat rows so it was ready to go. We then headed to Miami Lakes to 'Shulas Hotel' where we stayed for the night. It was raining but quite festive, with shops and restaurants nearby.

The following day we joined the cruise at Fort Lauderdale on 'Island Princess'. One of the smaller ships that can go into the Panama Canal, which has plenty of character. There was plenty of tinsel and Christmas trees adorning the decks. All we needed now was some good weather. Just our luck; there was wet weather and strong northerly winds for the first 2 days though it cleared up once we got to Jamaica.

We had an outside cabin with restricted view on deck 8, which was a great location as we were mid-ship and had easy access to restaurants and also the lifts for the pool deck . There weren't too many electric sockets in the cabin, but there was a hairdryer provided. There was a decent sized flat screen TV plus a large very comfortable double bed with plenty of hangers and cupboard space.

Our first day at sea was a little bit on the choppy side so we spent the day at the gym and attending the various talks on the ship. Something I wouldn't normally do if the weather was good. The internet package we purchased was the best I have had at sea so I could also check emails and any messages.

The passengers were mainly American with very few Brits on board so the entertainment was geared up for US customers so we saw plenty of NFL American football and no Premier League. There were also movies under the stars which had concerts during the day and films in the evening with the screen set up in front of the pool. In the evening they provide blankets and a cushioned bed to watch the movies. We saw 'Blinded by the light' and 'Yesterday' complete with subtitles which amused us as they were obviously struggling with the Watford and West Country accents! Entertainment on board was low key. There was a small theatre that had shows and comedians. Plus the crooners bar had an excellent pianist who could belt out a few songs. There was a house band that was more 'reggae' in the explorers bar plus quizzes that were heavily weighted towards the American audience.

Apart from the decorations it wasn't all that Christmassy. They did have carol singing on Christmas Eve and they had a gingerbread house-making competition, but the music was quite repetitive with 1950's Christmas songs being payed quite a lot (no Slade or Wizzard for us!) The dining arrangements were the same as every day so no gala dinner. On Christmas Day we spent the day in the 'Sanctuary' at the front of the ship, where the sunbeds were a bit more luxurious and you were waited on for lunch and afternoon tea. We thought this would have been full but there were only 10 people who took up on this, so this was actually really nice. The lunch was delicious with skewered prawns and avocado salad as we basically had the place to ourselves. We were sitting in the locks of the Panama Canal and although not sunny it was pleasant and dry and really peaceful as a lot of people had left the ship.

We picked this cruise for its itinerary as we hadn't done a couple of stops Cartagena, Panama, Costa Rica and Grand Cayman and Jamaica We were anytime dining which meant we didn't have to sit at the same table every night. We shared a couple of nights and occasionally ate on our own at a table for 2. The food was OK and the portion control was good though nothing really 'wowed' us as it had on other cruise lines. Though I thought the staff were the friendliest I had come across. Dress codes were not adhered to and the staff seem to turn a blind eye so people were allowed in the restaurants with trainers and also t-shirts which I thought was not very impressive. The buffet was nice with wonderful pastries and there was also a grill that did burgers and pizza if you just wanted a snack.

When the weather got better we even had some star gazing on the 16th deck!

I must admit my expectations were high for this cruise. The ship wasn't as good as I expected. It is 'small and friendly' and low key. We met some lovely people on board and had a great time but I was disappointed with the ambience and also the facilities on board. That is my opinion as I have cruised with several cruise lines now and have something to compare with. I think Princess' newer and larger ships out of Europe would be a completely different experience!