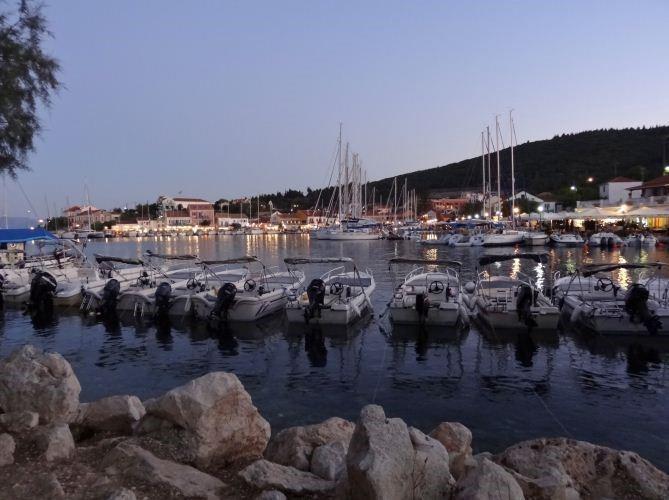 Seventeen years after meeting my now husband, we re-visited the island of Kefalonia where we first met.

Kefalonia is the largest Ionian island located off the west coast of Greece to the south of Corfu. Its flight time from the UK is approximately 3hrs 40mins, with the airport located in the south of the island. The Island has a very varied landscape from dramatic rocky coastline and mountainous regions to remote picturesque coves and beaches.

We stayed in the far north of the island in a secluded villa just outside the pretty harbour town of Fiskardo, which was approximately 1¾ hours transfer from the airport. Fiskardo is an excellent example of a typical Greek harbour, with excellent tavernas around the water’s edge, which by night looks wonderful as the lights twinkle in the water. As we were eating, we joined in with everyone else by watching the competency (or not) of captains mooring their boats for the night. It’s also the place to be seen if you are a celebrity visiting the Greek Islands on your yacht, and a taverna was host to Roman Abramovich one evening while we were there.

The island has many secluded coves and bays, where we could snorkel or just relax, and also boasts one of the most photographed beaches in Greece, Myrtos Beach, which lies down a windy road (and Kefalonia has many of those) and has the most spectacular blue crystal clear water. The coastline on the west of the island is rugged with cliff hugging roads, and the sight of the town of Assos nestling at the water’s edge at the bottom of the cliff is one of those places you will never forget seeing for the first time.

From Fiskardo you can hire many types of boats and explore the remote coves that are truly the jewels of the Ionian. The clear blue waters and secluded bays are ideal for snorkelling and getting away to your own private hideaway.

As with all parts of the Mediterranean there are many historic sights to visit from the Roman villa ruins at Skala, to the Acropolis at Sami, also the Melissani cave, which is accessed via boat, is a popular excursion.

There are many traditional tavernas along the roads and in the small villages, and if you want the authentic Greek experience of eating somewhere that has no menu, but requires a visit to the kitchen to look at what’s cooking, then take a trip to Jerusalem beach. You can even watch the sunset while eating at the taverna.

Accommodation on the island is available from 5 star hotels to self-catering studios and villas and whatever you choose the easy going Greek culture will have you relaxed and enjoying your holiday from the minute you arrive. For a typical relaxing Greek holiday without discos and loud music bars Kefalonia with its beautiful classic towns and villages is a dream destination.