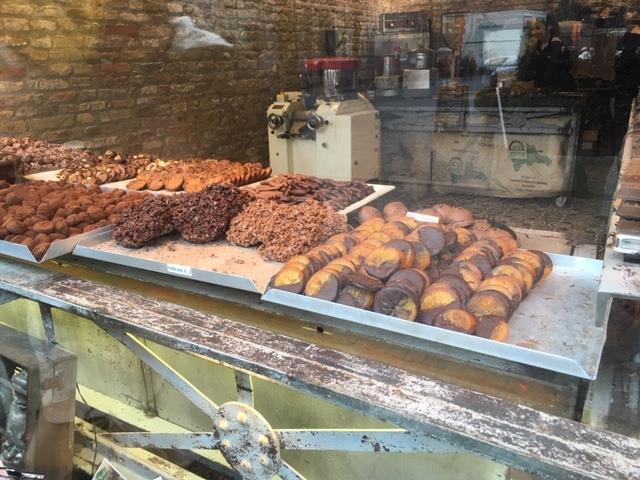 Anyone that knows me knows I do not do cold so a North European Cruise in December for me was quite drastic! This year from the 29th Dec -3rd January we were on Aurora sailing out of Southampton bound for Belgium and the Netherlands. We decided to stay in Southampton overnight before so checked into the very chic and trendy Novotel which was located next to West Quays shopping centre perfect for a bit of sales shopping pre-cruise.

On the day of cruise, we checked out headed for the mayflower terminal which was a breeze. It did help that we had pre-booked the parking on site, so we drove right up to the terminal, got rid of luggage and were checked in with 20 minutes and walking on board the ship. There is no luggage allowance so my answer to not knowing what to pack was to take everything. The weather had been quite mild, so we were able to sit on the higher decks, enjoy some lunch and have a drink before making out way to the cabins.

We were on deck 8 which was quite convenient for restaurants and bars and I had gone for an outside cabin with a port hole. Our original party of 6 had expanded to 12 so we decided to go for club dining which is second sitting at 8.30pm. Normally we would do freedom dining and eat when we want to. On set dining we sat with the same people every evening on the same table so perfect if you are with a group of friends.

The food on board was really good. There were four courses in the evening with plenty of variety to suit every palette and the portions weren't huge, so you didn't waddle out of the restaurant. From the restaurant you go straight to the show where you are entertained by singers and dancers plus a couple of nights, we had a comedian. There was live music in different bars, a cinema with the latest films and even a pub with live football on.

We had breakfast in the a la carte restaurant with waiter service (or the buffet as an alternative). We rarely made lunch as we were out and about in either Bruges or Amsterdam but managed afternoon tea at 4pm with sandwiches and cakes just to tide us over.

Bruges was lovely with its Christmas markets and delicious chocolate waffles and wonderful beer. We had to get a train there but it’s all part of the adventure and it’s a really pretty town to stroll around.

In Amsterdam we were able to berth within 10 minutes’ walk of Grand central station. We had 48-hour tram/metro tickets to help us around the city. Our first stop on New Year’s Eve was the Resistance museum which is located opposite the zoo. it was fascinating and definitely worth a visit and helps you see what happened to Amsterdam during the occupation in the second world war and how local residents dealt with it. We were in there nearly 3 hours! We wandered around the different streets and individual shops and made our way back to the ship to get ready for the New Year’s Eve party.

What a night! We were entertained by a great show which was highlighting musical theatre which was to a very high standard and dinner was amazing. Then we made our way to the higher deck and put on our coats to watch the most amazing firework display put on by the city of Amsterdam and we had the best seats in the house! It went on for an hour and along the horizon there were firework displays all over Amsterdam. We then went into the masquerade disco and danced until about 3am.

On New Year’s Day we went into Amsterdam exempt from hangover. We expected it to be quiet but far from it, it was full of people. We went cheese testing at an artisan cheese maker with wine included and concluded our day with a scenic cruise along the canals to see the Christmas lights art installation, before returning to the ship just in time to get ready for dinner. It was one of our party’s birthday, so I arranged a cake for him as a surprise. The captain even sent him a card! The waiters all sang happy birthday - it made his day!

The last part of our cruise was a day at sea - there were plenty of activities going on. The 'boys' braved the deck to see us go through the locks from Amsterdam port to the sea. I went to see Mama Mia 2, there was a Killer Queen dance show on, pantomimes, fitness classes and a roulette tournament.

It all went so fast I couldn't believe we would be landing back to Southampton in the morning.

So all in all a great experience that I would highly recommend. Great for groups of friends or family wanting some special time together over the festive period without breaking the bank and no luggage allowance!