Searching for Santa in Lapland 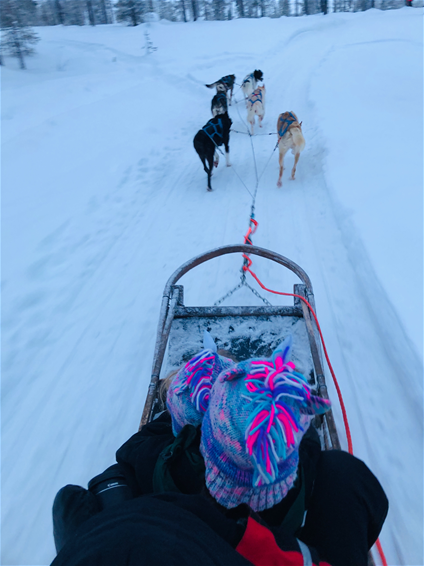 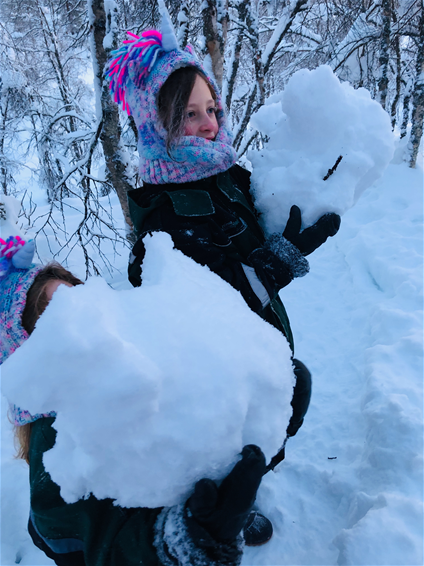 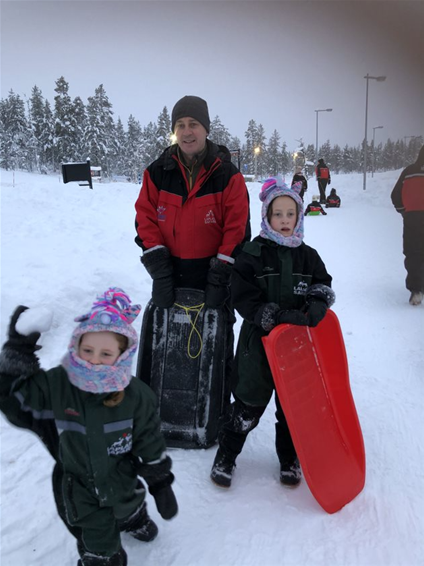 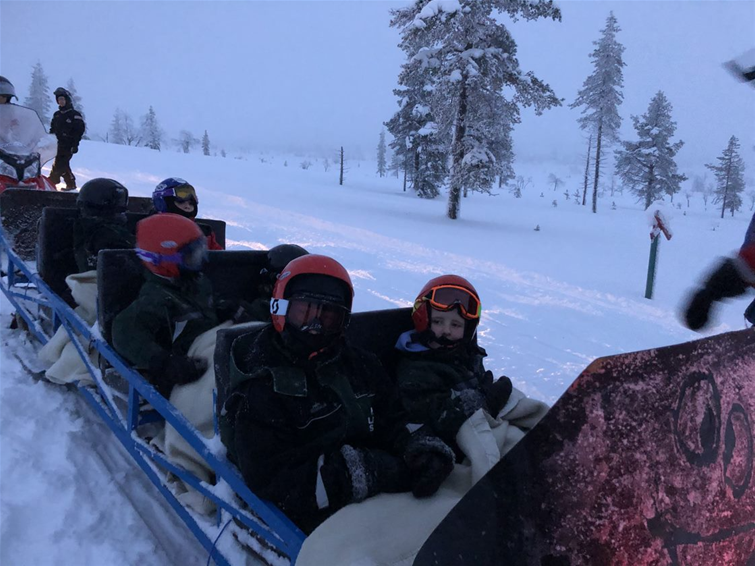 The dogs are barking furiously and there is a flurry of activity, we get into the sledges and the chorus reaches a crescendo. The sledge in front moves and we are off. Instant silence fills the crisp air, only broken by the smooth crunching of the snow as we whizz through the forest of pine trees, each branch holding a thick layer of snow. Two Hundred and fifty miles north of the arctic circle the dusk-like glow in the sky is as light as it gets in deep December. The winter wonderland stretches as far as the eye can see, creating a sense of peace and beauty which is intensely relaxing. The magic of the moment is reinforced by the excited giggles of the children as they watch the dogs in front, Daddy is driving the dogs which only serves to heighten the hilarity. They run easily and nimbly, the snowy tracks presenting them no challenge at all, yet it’s – minus fifteen degrees and the icy air shocks our faces.

Husky sledging is just one of the many activities we experience for the first time today in Finnish Lapland. Skiddoo’ing, ice hockey, reindeer sleigh rides, sledging, ice fishing have also been attempted. The list reads like something out of a children’s fantasy book. What we are here for though is the big one, “searching for Santa”, which is coming next. The children have been waiting patiently for this moment ever since we gave them the news that we were going to Lapland.

Finally, it’s time to get onto the “magical sleigh” and take off once more into the icy wilderness. After a few minutes, we can just about make out a faint fiery glow in the distance. As we draw nearer we see fairy lights twinkling outside a perfect log cabin. Then the excitement peaks as we spot a couple of giggling elves who greet us in their native “elf language”. After a brief game of “gift throw and catch”, we knock on the door and enter the tiny wooden cabin. A warm fire flickers in corner of the room and the walls are stacked high with presents. There, in a rocking chair, sits the hefty figure if Santa Claus. His perfect white beard tumbles almost to the floor and he speaks in a low accented voice. “Welcome Cassie and Skye, how have you been”?

It’s there where the similarities end to a normal “Santa visit”. Santa chats to the children about “the 3 most important things”. He embodies the Santa we have always imagined, the one we have seen in endless books and films and the one we believed so loyally in for our entire childhoods. The children’s faces change from coy smiles to utter disbelief as he pulls out of his pocket the letters they sent him 2 weeks previously. “It’s my sister’s letter!” Exclaims older daughter in total astonishment. They giggle in nervous wonder as he reads out each letter in turn. After lots of questions and answers about elves, workshops and general Santa-ness it’s time to say goodbye and we watch the elves waving as we swish through the snow back through the forest. Soon the cabin is a mere twinkle on the horizon.

Back at base camp, the children talk non-stop as we sip hot berry juice and eat pancakes in the “Kota” (warm hut) before we watch an elf show in a beautifully lit igloo. That night the children are still buzzing and on our flight home we realise that Santa and his elves may be long gone, but the memory of this magical experience will be etched into all our minds forever.

If you are planning to take your kids on this once in a lifetime trip please get in touch and I will guide you through the many different options to find the perfect Lapland experience for your family.