The South America diaries: The Zebras of La Paz 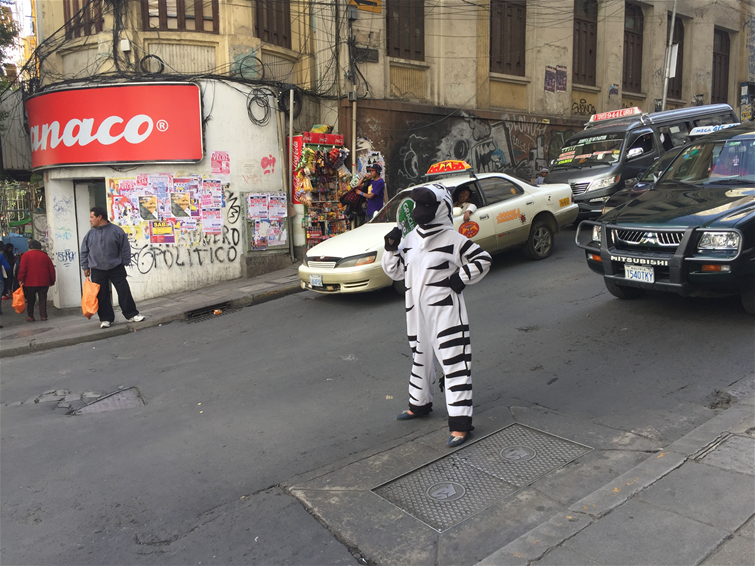 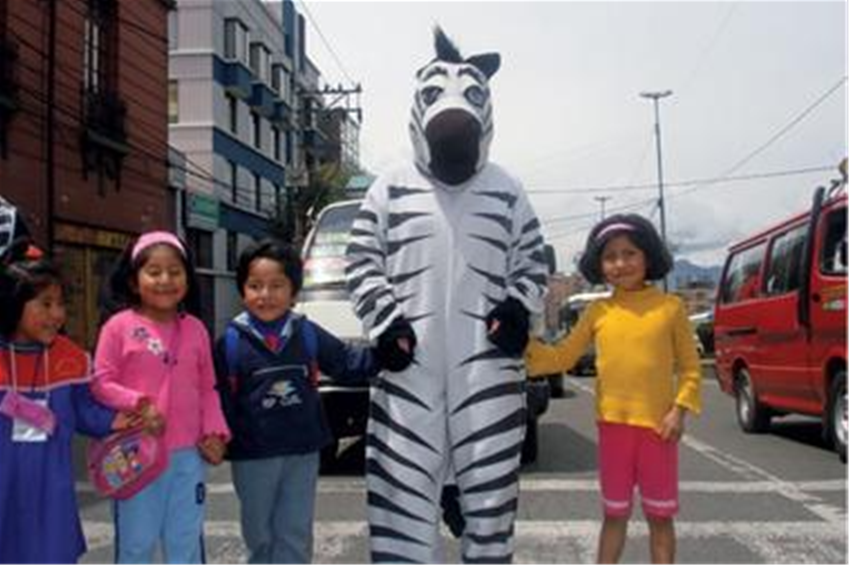 This article appeared in the Daily Telegraph as winner of their "Just Back" competition.

Squinting in the high altitude sunshine of downtown La Paz my lungs struggle and all my senses are assaulted at once. Businessmen whizz past homeless people begging, colourfully dressed Cholitas sell their wares from stands, shoeshine boys wait hopefully on every corner, and the noise of omnipresent beeping is almost deafening. Just for a moment, I think I spot a zebra amidst the chaos. Not a real zebra you understand, but someone dressed up in the full furry zebra suit. Sure enough, there are a group of people dressed as zebras in the middle of the manic El Prado thoroughfare. Some are dancing to music blaring from a speaker, some are talking to pedestrians and one seemingly suicidal zebra is in the middle of a road with a lollipop guiding people across the street.

These are no ordinary zebras and this is no ordinary initiative. In a city which hosted over 9000 traffic accidents in 2015, crossing the road here really is a case of taking your life in your hands. La Paz has seen its population boom and the number of vehicles in the city has doubled in only 6 years. The roads are choked with vehicles vying for every inch of space. Traffic signs are considered a guide, accident statistics deadly, and crossing the road an art form. It is the city's faded zebra crossings which inspired one of Latin America's most forward-thinking urban groups. The Cebras De La Paz were formed in 2001 and initially aimed at educating both pedestrians and drivers, encouraging them both to obey traffic signs. Starting with just 24 zebras giving out leaflets, the "Educadores Urbanos Cebras" (Zebra Urban Educators), have now grown to a group of 400 in La Paz and 3 other Bolivian cities. As a non-aggressive form of traffic intervention, the zebras can often be seen ticking off disobedient drivers, but it is their absolute positivity which makes them such a loved part of the city's commuting force. Waving, stopping to hug children, high-fiving pedestrians: their jollity is endless.

"The role we have is to change and improve how everyone is thinking", enthuses Christian, a zebra who bounces around La Paz's busiest intersections from 7am-11am every day. "You need to see the positive side of everything and it's up to us to put our best foot forward".

Underneath the stripey suits though, this is about more than road safety. Each zebra is selected from organisations who work with at-risk youths. Young people are given the chance to form friendships, learn, and take on responsibility. Many of them were previously on their way down less positive paths such as drug addiction or youth offending. After 2 months of training in road safety, citizenship and "the spirit of being a zebra", they are let loose on the streets spreading their unmitigated positivity and desire to help. Each zebra is paid a small stipend, but perhaps worth more is the access to training courses and classes they earn aimed at improving their opportunities. Zebras can now be found leading education programmes in schools on topics such as bullying and conservation.

La Paz’s traffic problems are going to need a lot more than the positivity of the zebras, but the many murals in the city depicting their work make it clear that they are now a much loved part of city life. A scheme of such success, several other Latin American countries have adopted it and European cities such as Madrid are considering it.

Las Zebras de La Paz conveniently translates as "The Zebras of peace", and in the midst of one of Latin America’s least peaceful cities, they are a welcome addition.