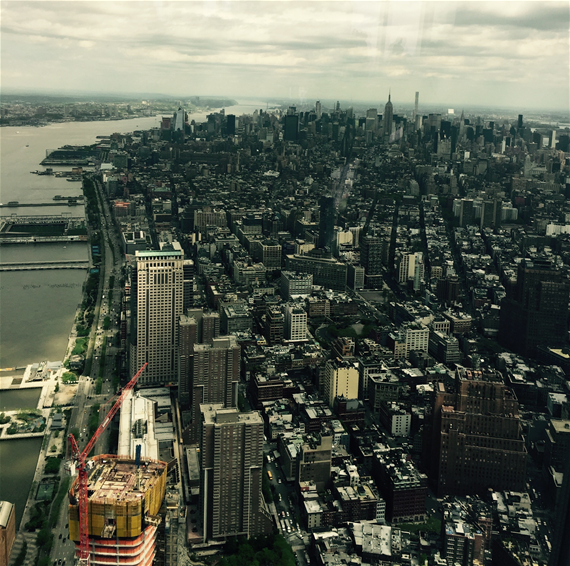 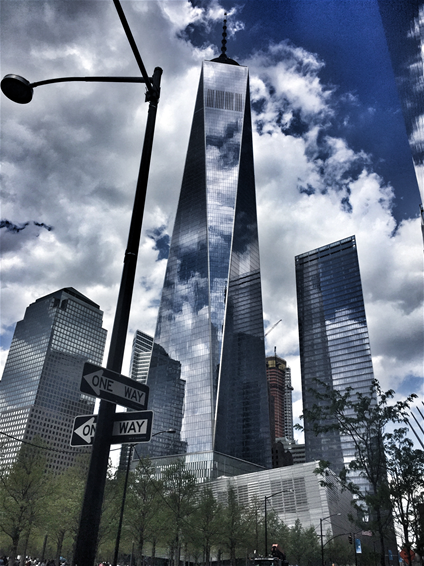 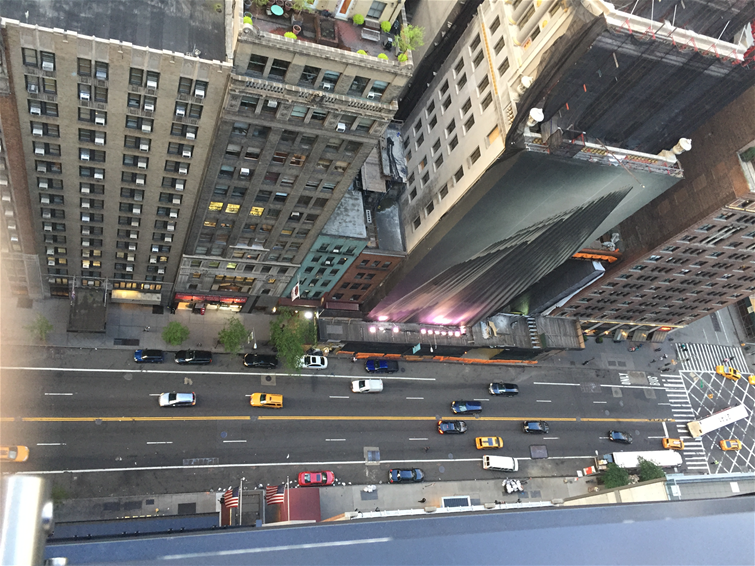 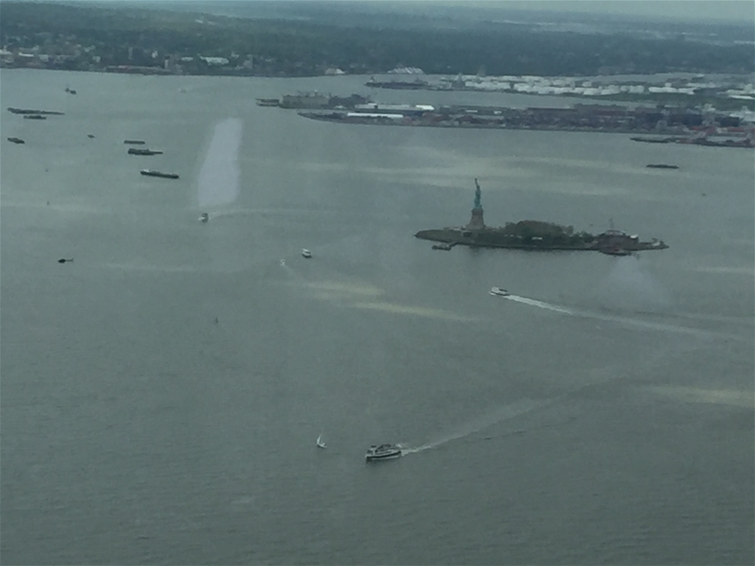 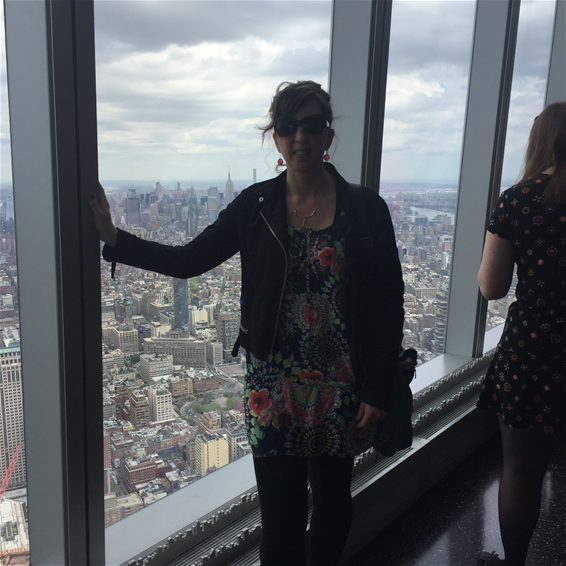 Spectacular views are not the only draw card to New York's 541m high One World Observatory.

Nearly 20 years since the day the world can never forget, the new One World Trade Centre pierces the clouds in its brand new glass and steel glory. Built on the northwest corner of the World Trade Centre site, it stands where 6WTC once stood before the entire area was decimated by the September 11th attacks. The tallest building in the Western Hemisphere, its 102nd floor opened to the public in May 2015 as the One World Observatory and it promises the best views in existence of the New York skyline.

From entering the attraction to the point of arriving at the viewing platform the experience is basically a show, but impressive nevertheless. Though of course, I am as horrified and sympathetic as the next person about the atrocity which occurred right here 16 years ago, I am unprepared for the overtly patriotic atmosphere. We enter through airport-style security and are ushered through a tunnel where a heartfelt video montage entitled “voices” describes the building of the tower through the eyes of those who worked on it. “This tower is the new symbol of America,” says one of the chief engineers. The symbolic cornerstone of the 1WTC was laid back in 2004, however, work on the foundations did not begin until 2006. The bomb-resistant 20-story base is set on 70-ton shafts of steel with pilings which had to be dug more than 60 meters underground. It took 10,000 workers another 8 years to finish the 102 story building. Building inspector Mark Becker compares the building of the tower to raising a child: “It takes a lot of strength and patience. But in the end, you couldn’t be more proud.” Further on through the tunnel, we walk through the actual bedrock foundations of the building which lends an interesting touch.

Entering the lift I am expecting to be whizzed at breakneck speed to the 102nd floor, but not expecting what comes next. The lift ascends 381 meters in 47 seconds – that’s the equivalent of 23 mph an hour. On the 4 walls of the lift time lapse projections give you a bird’s eye view over New York through the ages. As you soar upwards you literally see 500 years of New York history unfolding before you; the city being built bit by bit from the original bushland to the first settlers until you finally arrive at the skyscrapers views of today.

“Welcome to One World Observatory” a deep voice booms as we exit the lift. We are all ready to see the views, but not yet it seems; there is more to come. It’s showtime again, and we are treated to another impressive 3D depiction of the sights and sounds of NYC projected onto a huge floor to ceiling screen. More views of Manhattan and images of New York’s hallmarks are combined with more uplifting music. After a spectacular finale we are left with a projected view of the Manhattan skyline and then surprised when the actual screen rises to reveal the real thing, accompanied by cheers and applause from the crowd. Despite not being a massive fan of this type of “Americanisation”, this was a totally heart-in-mouth moment!

So now for the views? No. Almost, but not yet. The screen goes down again and we are ushered into another section with frosted glass, the staff tries very hard to persuade us to rent “One World Explorer ipads” to use from the viewing deck. These did look to be a very useful addition and had I been here longer I may have partaken. (You can point the device in any given direction, and it will show you the landmarks and other sights in that view, at a cost of $15).

Then the show is over, finally, we step out on the 102nd floor into the Observatory and are standing in the sky above Manhattan. 360 degrees views are all around. Manhattan skyscrapers sandwiched between rivers twisting their way as far as the eye can see. The Empire State Building, the crisscrossed grid of the city streets, the New Jersey suburbs.

From up here the Statue of Liberty looks like a miniature model with tiny ferries and helicopters quietly snaking around her. All the most famous points of New York are laid out neatly beneath you; the tiny Brooklyn Bridge looks close enough to touch. Miniscule yellow cabs look like toy cars below as New York life hums along below. Nothing I can write here will do this view justice so I will point you to youtube for plenty of videos.

There is an interesting "sky portal" in the middle of the observation platform, where you can see live shots of the street scenes from below, only recommended for those who like heights! I like the way they have added more to the viewing deck experience here: in the center, there is another diversion called "The City Pulse". Local New York guides offer a comedy insight to the city using a ring of touchscreen monitors. These are not just any old monitors though, they can respond to the arm gestures of the guide to offer real-time snapshots of information about dining, areas, local life and landmarks. It's seriously high-tech stuff in here! The viewing also deck feels very roomy and despite filling up with people does not at any point seem too crowded.

Standing here taking in the skyline it does feel like people do not come here strictly for the views. Breath-taking as they are it’s about more than that. You are standing spiritually in the same place where 3000 people died on one day within our lifetime. The One World Observatory does a brilliant job of commemorating this without dwelling on it and celebrating this iconic building in a unique attraction. Brimming with American drama though it is, it’s unmissable. One World Observatory has done more than filling a void in the city; it has reclaimed the skies of New York.